The Essentials:   A Guide to Great Watches

In the age of smartphones and laptops, it’s often nice to have a timepiece that does exactly what it’s supposed to and won’t lose its luster with the introduction of a new edition. Long-lasting and increasingly beautiful with age, a watch is one of those things that acts as a perpetual reminder of where it came from and why it’s still around. It’s not just about the workmanship: oftentimes, an item like this is a gift or heirloom passed down from one to another, and the associated memories render it all the more valuable and special. As a watch aficionado himself, co-founder Joe Lotuff comments below on an assortment of eight pieces whose stories and history are as varied as their faces and bands.

Of all the watches in this collection, the Rolex Daytona is the one I like most. This company has such a great, varied history, and because the Daytona model varies slightly in construction over time, it’s easy to date and interesting to observe the changes that it’s undergone. Popularized by Paul Newman, the Daytona passed its 50th anniversary in 2012, making its design slightly newer than the Rolex GMT Master II. The Master II style launched in 1954 and is a bit more classic in terms of appearance, although no less sleek. The cyclops and lug holes on this particular one indicate that it’s on the older side, although it hasn’t gone “tropical” yet. A few more days out in the sun, and its face might just develop that coveted brown, leather-like patina.

Similar to the Master II is the 1994 IWC Aquatimer 3719, an automatic style made of titanium and offering a clear, modernized dive timer. It’s clear that this is a sturdy, well-made watch, but it should be noted that a watch doesn’t have to be obvious to be extraordinary. Take the two A. Lange Sohne Sax-O-Mats, for instance; these German watches are extremely subtle and craftsmanship-focused, but the proof is in the details. The exposed back shows off their gorgeous inner mechanisms- but this isn’t visible unless the watch isn’t being worn. The calendar date is large and blissfully easy to read- but this doesn’t register until squinting at the tiny numbers on the face of another.

Of course, simplicity has its place, too. The Omega Seamaster has been around since the late 1940s, and I find this 1952 edition to be a really appealing design for its worn-in look and unusual date window at the 6:00 hand. The Seth Thomas and Bulova Accutron are likewise deceptively unique, with the former being quite rare — the company is mainly known for its grandfather clocks —and the latter offering an innovative Swiss tuning fork. 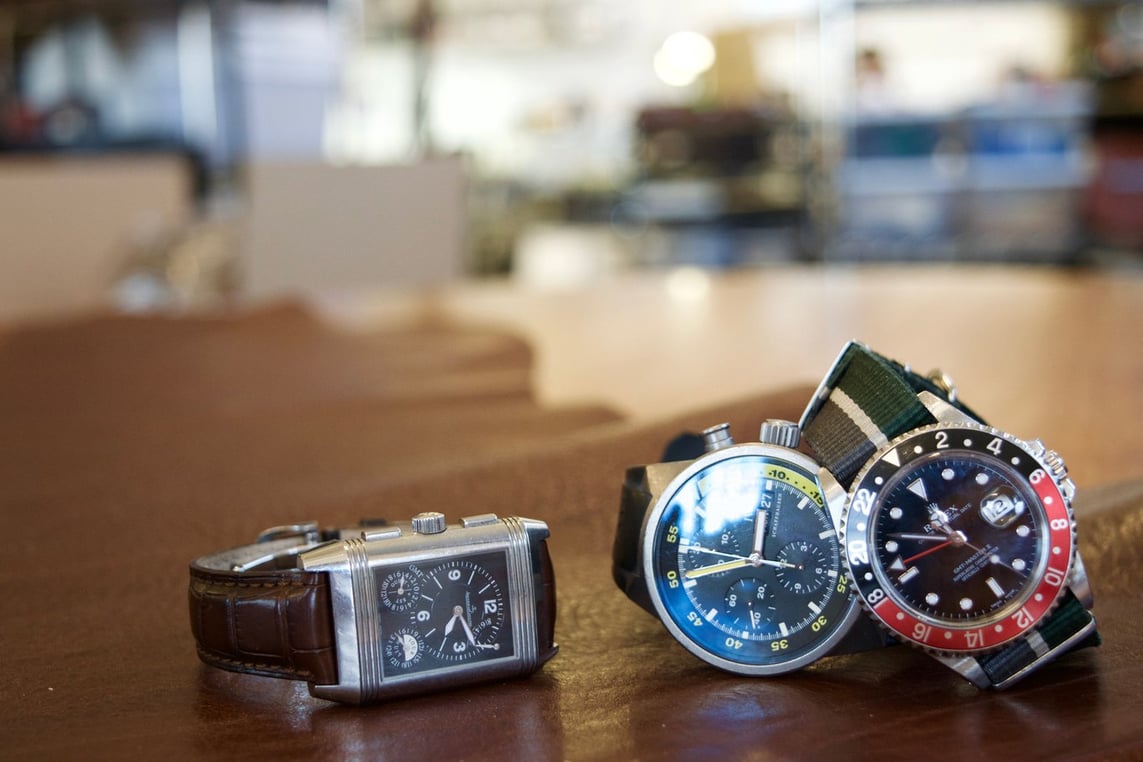 Lastly, there’s the Jaeger-LeCoultre Reverso Grande GMT, a watch in a league all its own. With a day-night indicator, GMT display, and more, the sheer number of complications alone make it stand out- not to mention the fact that it’s a dual-faced model, allowing for two different time zones to be captured in one watch.

Any discrepancies aside, what these watches all share is that they’ve built a good reputation for themselves and have proved they can stand the test of time. Regardless of whether they’re Swiss or German, classic or modern, they’ll keep running through the years and from wrist to wrist.