You might recognize our friend Willa as the garden fairy of a mixologist who takes our open studios up a notch with her company Little Bitte Cocktails. Edible blossoms, house-made bitters, and gorgeous visuals are the name of her game, so when we heard she was traveling to Italy with her also-artistic boyfriend Shawn—see Providence Painted Signs—we knew we had to share her unique perspective. Here are the highlights of Willa’s eight days in Prosecco paradise. 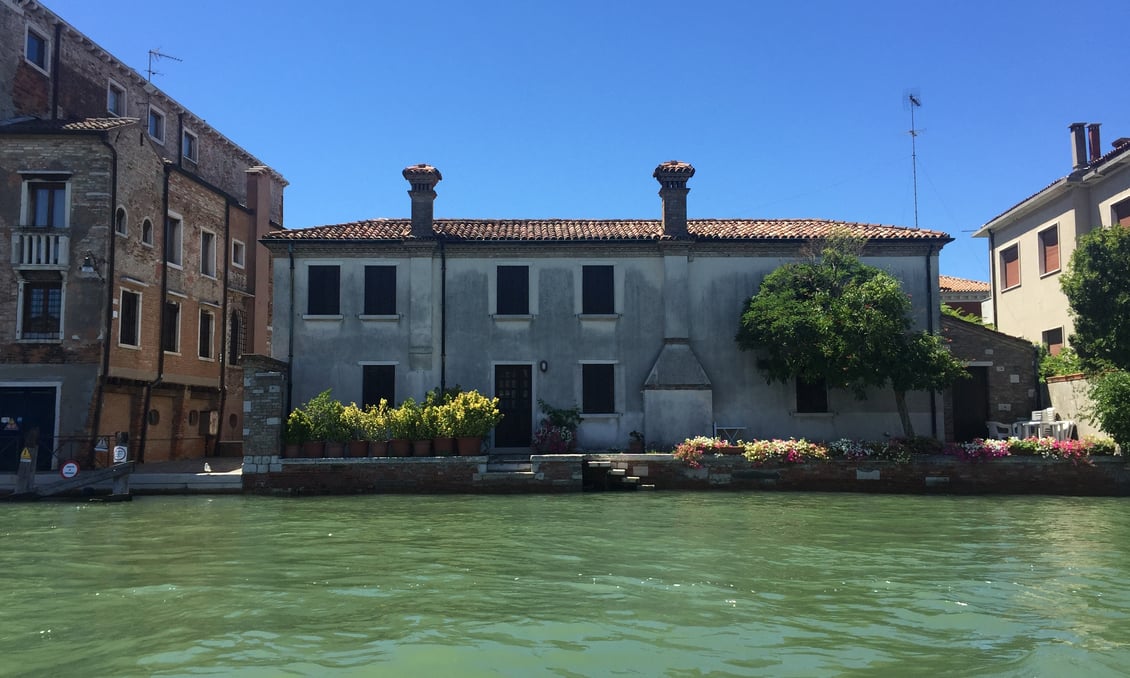 A long day of flight transfers and water taxis completed, Willa and Shawn officially started their trip in Venice. Of their first hotel, Willa says, “The first place we stayed ended up being amazing. It’s called the Palazzo san Luca, and it’s a little boutique-style place that made me think of a tinier Italian version of the Dean [Hotel, in Providence].” It’s never the same experience twice: “Our room felt very antique-y, but when we stayed there again at the end of our trip, the room we had felt more modern.”

After checking into the hotel, they rolled into town just in time for aperitivo and Aperol Spritzes. (“True ones are made with Aperol, Prosecco, and a splash of sparking water, garnished with an orange wheel and olive!”) Authentic citrusy libations acquired, the two finished the night with dinner and a requisite walk across the Rialto Bridge.

“The next day, we wandered around the city for a while longer and then took an independent water taxi to the train station, where we embarked on a two-hour ride from Venice to Florence. Florence is where I spent a year ten years ago, so it was a beautiful homecoming!” 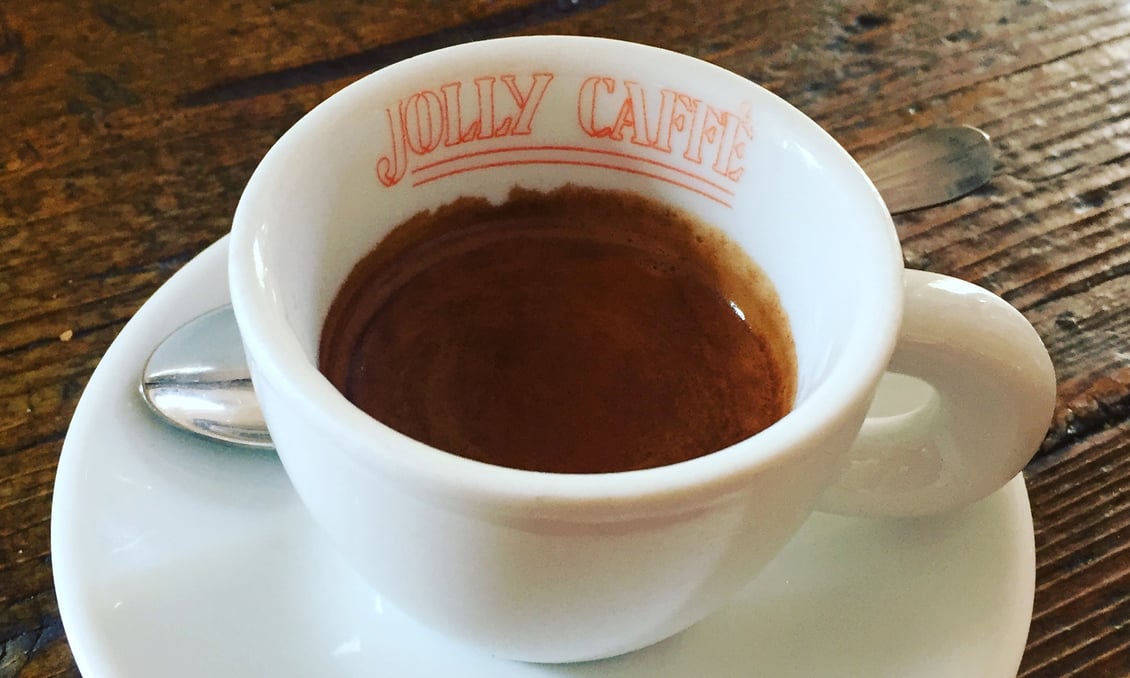 In the morning, Willa and Shawn visited the Mercato Centrale and had a very Italian breakfast of cappuccinos and brioche, “but then we expanded into pizzas, of course.” They also walked to get gelato at Vestri, her favorite gelateria in the world. It’s a little tiny store whose owners are esteemed, as The Washington Post notes, for producing the cocoa they use themselves rather than outsourcing. With maybe eight or ten flavor varieties in total, Willa’s two picks were “cioccolato al peperoncino, which is a spicy dark chocolate, and fior di latte.” 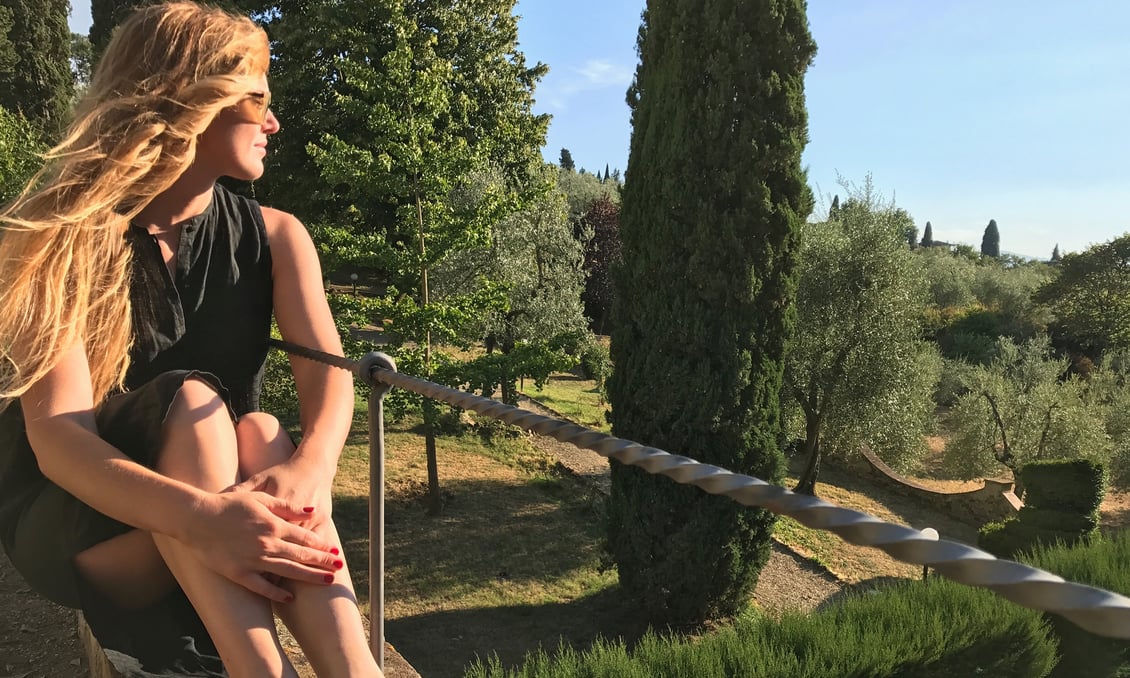 Willa stayed at Villa Agape during her time in Florence, which was her “absolute favorite hotel of the trip.” This former convent, converted about four years ago, can be found all the way up in the hills about ten minutes outside of the main city. In contrast with its imaginably austere history, Villa Agape has richly luxurious rooms, but the seven-acre olive orchard remains. “We had actually only planned to spend one night there and ended up staying for two because it was so very nice. Like at Palazzo san Luca, our first room was more modern and spacious while the next was cozier and seemed to have more old-world charm, with gilding everywhere and satin curtains.” 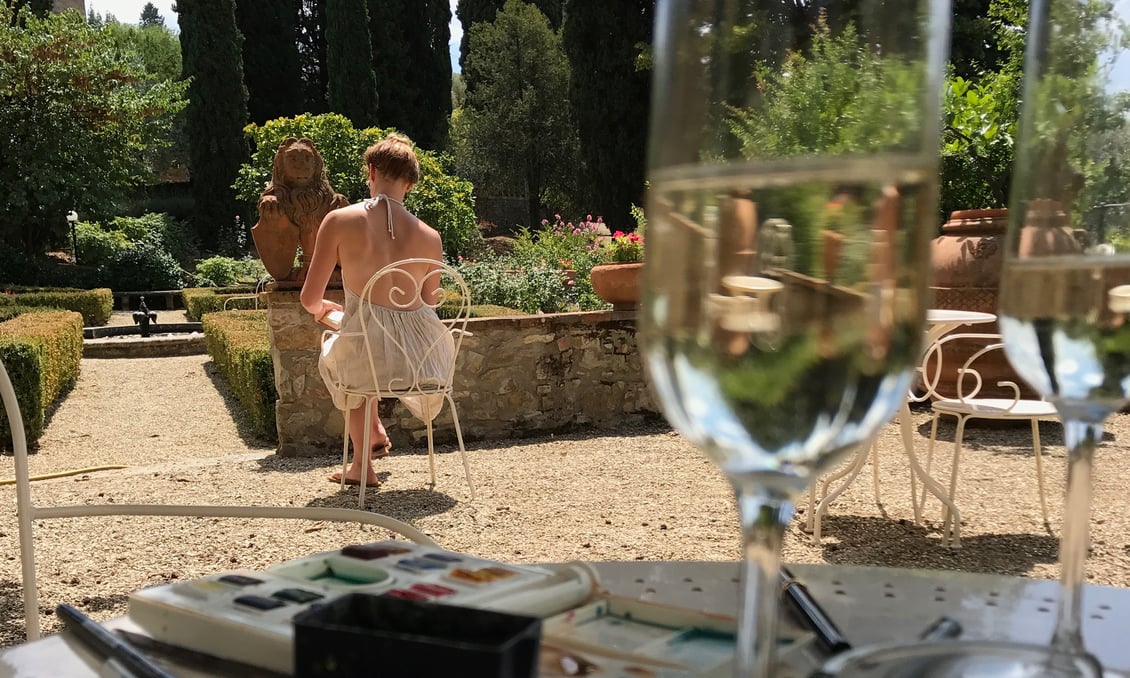 “Every day at around noon [at the villa], we would order a bottle of Prosecco and sit on the terrace and paint, and get in tune with our creative selves.” But when her and Shawn did venture into town, they found their way back to the perfumery at Santa Maria Novella, another truly amazing place and a must-see for anyone visiting Florence. It opened in 1612, and at the time, monks worked to create all the perfumes and medicines. Since then the store has added many other products to their repertoire, but most things are still made according to those original methods developed so many years ago.

In Willa’s words, “This place is totally wild. It has dark hardwood shelving floor to ceiling and there are frescoes on the ceilings. In every corner there’s a perfume or soap station, and they even have a number of bottled medicinal bitters you can use in cocktails. Of course I had to buy some! I also bought my favorite tobacco perfume that’s smoky and sweet and really beautiful.”

That same evening, they had dinner at Del Fagioli, located right near Santa Croce and the Arno. It’s been one of Willa’s most-loved restaurants since she lived here years ago, and “they’re famous for their incredible Florentine steak.” On the second night in Florence they went to Trattoria ZaZa, close to the Duomo, and split a few pasta dishes. “That night we also had drinks on top of the Westin Excelsior, because it has amazing rooftop views!” We also have to give a shout-out to Salumeria Verdi here (or Pino’s Paninos, as the locals call it), which is Willa’s longstanding favorite sandwich shop.

It was “so incredibly hot” the next day that the two travelers decided to rent a convertible and leave the city for a bit. “We escaped to the Tuscan seacoast in a Fiat 124 Spider and drove south to visit Monte Argentario, a very odd but amazing and traditional beach town. It feels like the Miami of Italy—it’s where all the Italians vacation! You just spend your time suntanning until you get too warm, and then you can roll right into the ocean.”

When the skies cooled down later that night, they went into town and unexpectedly but happily found it “totally packed, like WaterFire-level packed.” (What’s WaterFire, you ask? Come to Providence and find out! Hint: it’s amazing.) Little open-air stalls were selling everything from fresh fried squid to leather goods, and “there was even an insane black licorice stand.” Willa and Shawn ended up with pizza (again) that night at “a random little hole in the wall,” then finally went back to the hotel. 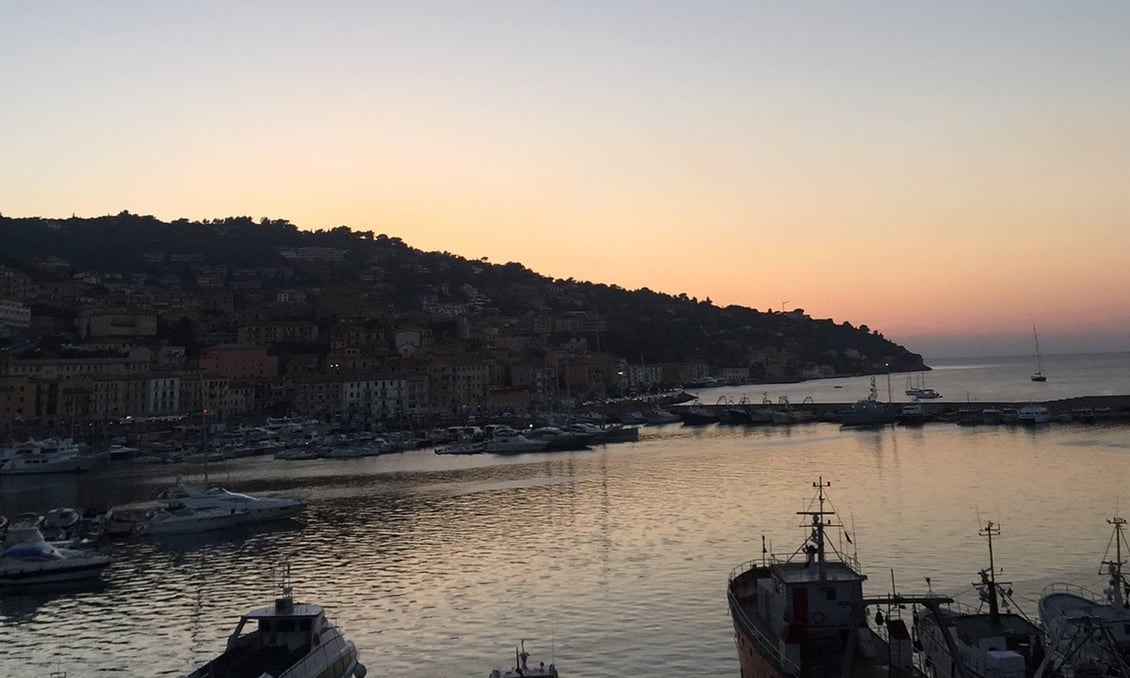 Monte Argentario is known for its panoramic seaside roads, and so early in the morning, they went for a sunny drive. “From up there,” Willa says, “this place looked like a cross between Miami and Big Sur. You could see straight through the 15 feet of water to the bottom… I’ve never seen anything like that before in my life. Every grain of sand was visible.”

Following this was a drive back to Florence to catch a train to Venice once more. While Shawn was “utterly fascinated by all the gold leaf signage” in Florence, the home of the world's oldest gold leaf factory, Willa had her sights set on the glasswork museums of Murano. “The artisans in Murano weren’t the first to blow glass, but they were the first to blow clear glass—which is more difficult than colored—and really perfect that art. I completely fell head-over-heels in love with Venetian chandeliers, too. They’re completely bananas!”

Their last day in Venice was spent doing a lot of shopping for Italian linen and cashmere, “because that’s what you do in Italy! I had my eye out for amazing wines and fabrics and spices as well. We got some great ones in the Mercato.” All good things must come to an end, but if they must, at least beautiful objects like these didn’t have to be left behind as the voyage back to Boston began. 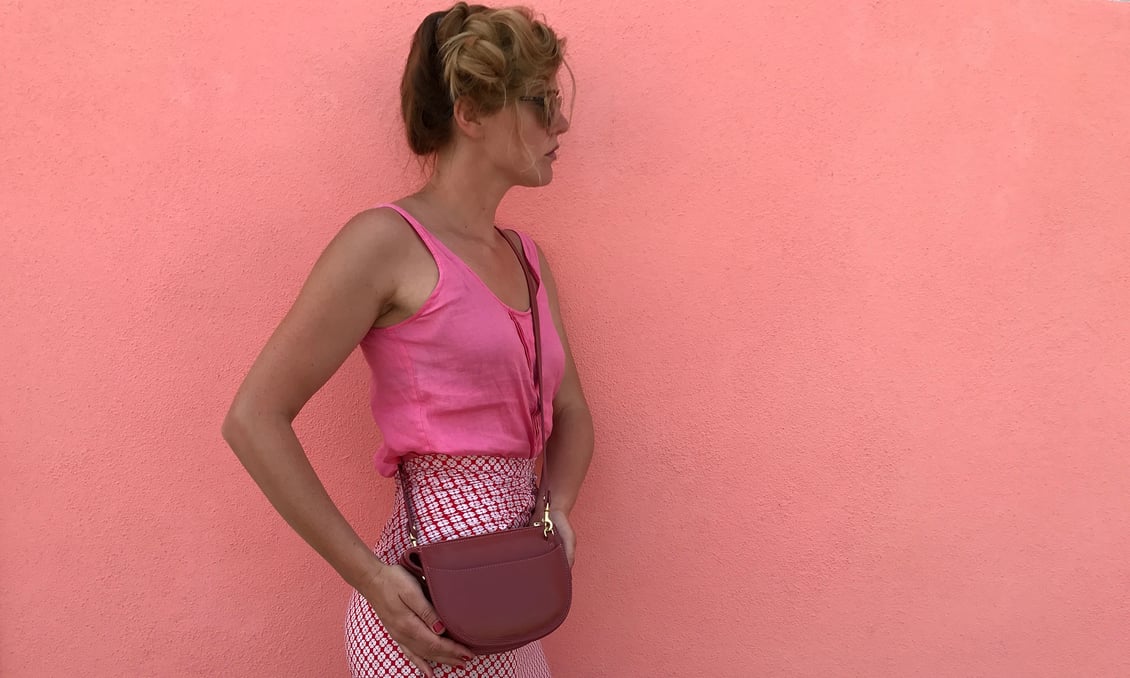 Speaking of beautiful objects, Willa carried our rosewood Mini Luna throughout her entire adventure. "It fit my wallet, phone, passport, and lipstick—what else could you need? I think it’s my favorite Lotuff bag I’ve ever owned!”