Travel Guide:   Churros, Natural Dyes, and Markets All Over Mexico

Molly O’Rourke is the owner of One & Supp, a creative design studio specializing in styling and events. She’s incredibly talented, she’s our friend, and she’s back from a beautiful three weeks spent exploring Mexico with her five-year-old son! From Mexico City to Oaxaca to Puerto Escondido, markets to beaches, and ceviche to churros, Molly was kind enough to share all the details with us—in her own words, here’s how the adventure went down.

A few years ago, after starting my business and making the transition to becoming a full-time single parent, I had a ballsy moment and decided to book an impromptu three-week trip to Los Angeles with my toddler son. I had never traveled solo with him for an extended stretch, but once I made the leap we never looked back. Last year, when he was four, we spent a month traveling together in Thailand and this year we decided to spend the month of February in Mexico. Surprisingly, I’d never been—how is that even possible!?—but when scouring the map for destinations that offer up vibrant city life with beach time and a distinct food culture, Mexico topped the charts. Not every place can hit all these marks! And then you add beautiful weather, crazy geography, super-kind people and endless opportunities for adventuring. It’s the perfect destination.

We started in Mexico City, where we stayed in a lovely old colonial building in Polanco. I had a feeling I’d love Distrito Federal, but it was even more green and vibrant and chic than I expected. It is a city where people are constantly outside—strolling, eating, socializing—so we spent a lot of time in the many parks and outdoor spaces. We also obviously made a pilgrimage to Frida Kahlo’s Casa Azul in Coyoacán. (That iconic blue!). Coyoacán was such a charming, bustling neighborhood on a Sunday, and we spent our day exploring the markets and town square. If you go, I definitely recommend eating your weight in ceviche at the Coyoacán Market. My son Amon would recommend that you sit down on the pavement in the square and watch a local clown perform their hilarious (and decidedly raunchy) act while devouring an ice cream cone. 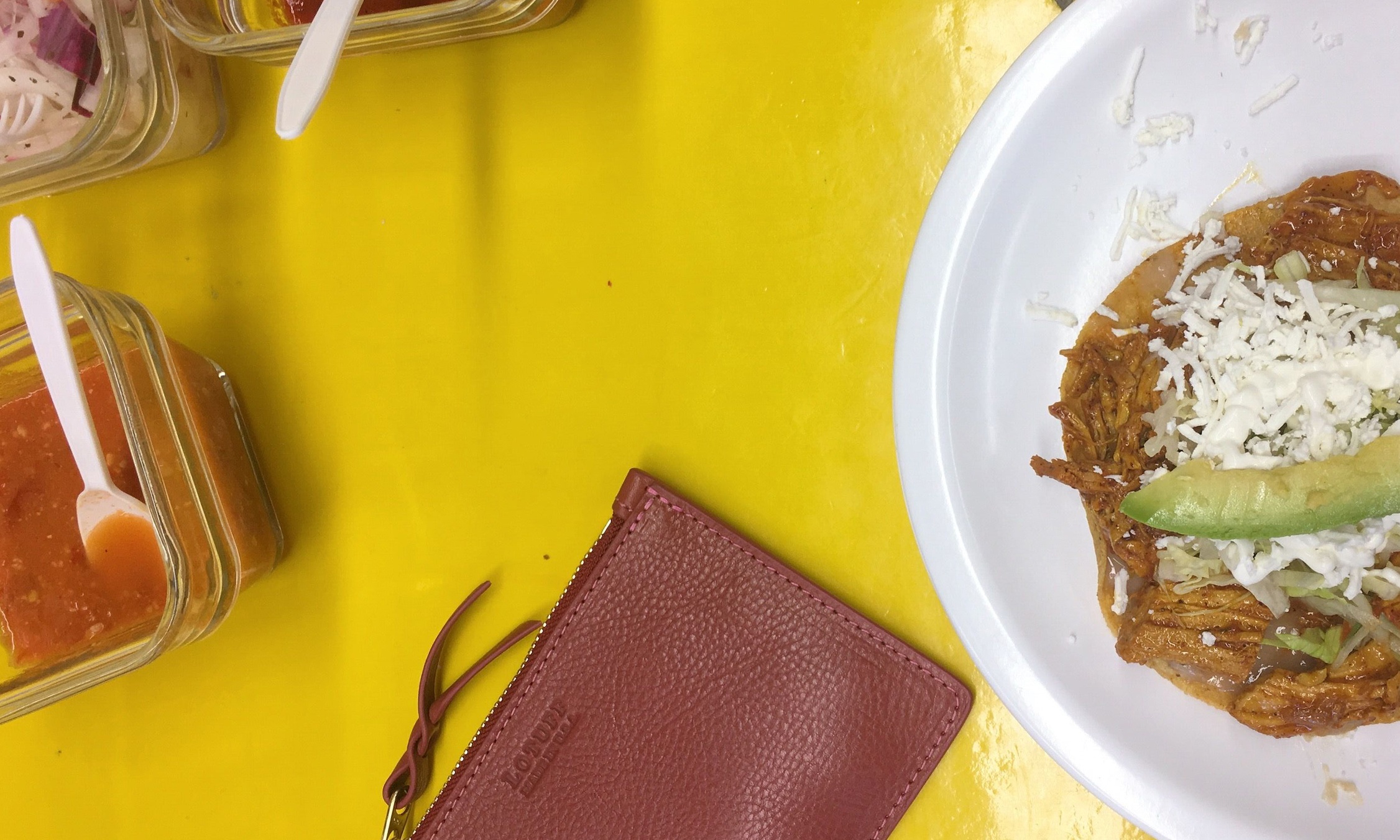 And lest we forget about the food in Mexico City! It’s insane. I admit I sometimes have a bit of handicap traveling with a 5-year-old’s attention span and palate, but he’s getting pretty good. All the hype sent us to Contramar, and for good reason. Tuna tostadas and their signature red and green whole fish truly live up to the hype. Churros at Churrería El Moro! Cochinita pibil tacos at El Turix! We were even able to hang with some NYC restaurant pals who now own a little spot called Cicatriz in Juarez. They filled our bellies with delicious cocktails, crunchy salads, and a fried chicken sandwich when we most needed it. We also taste tested every street smoothie and jugo and cup of fruit and paleta that crossed our path. 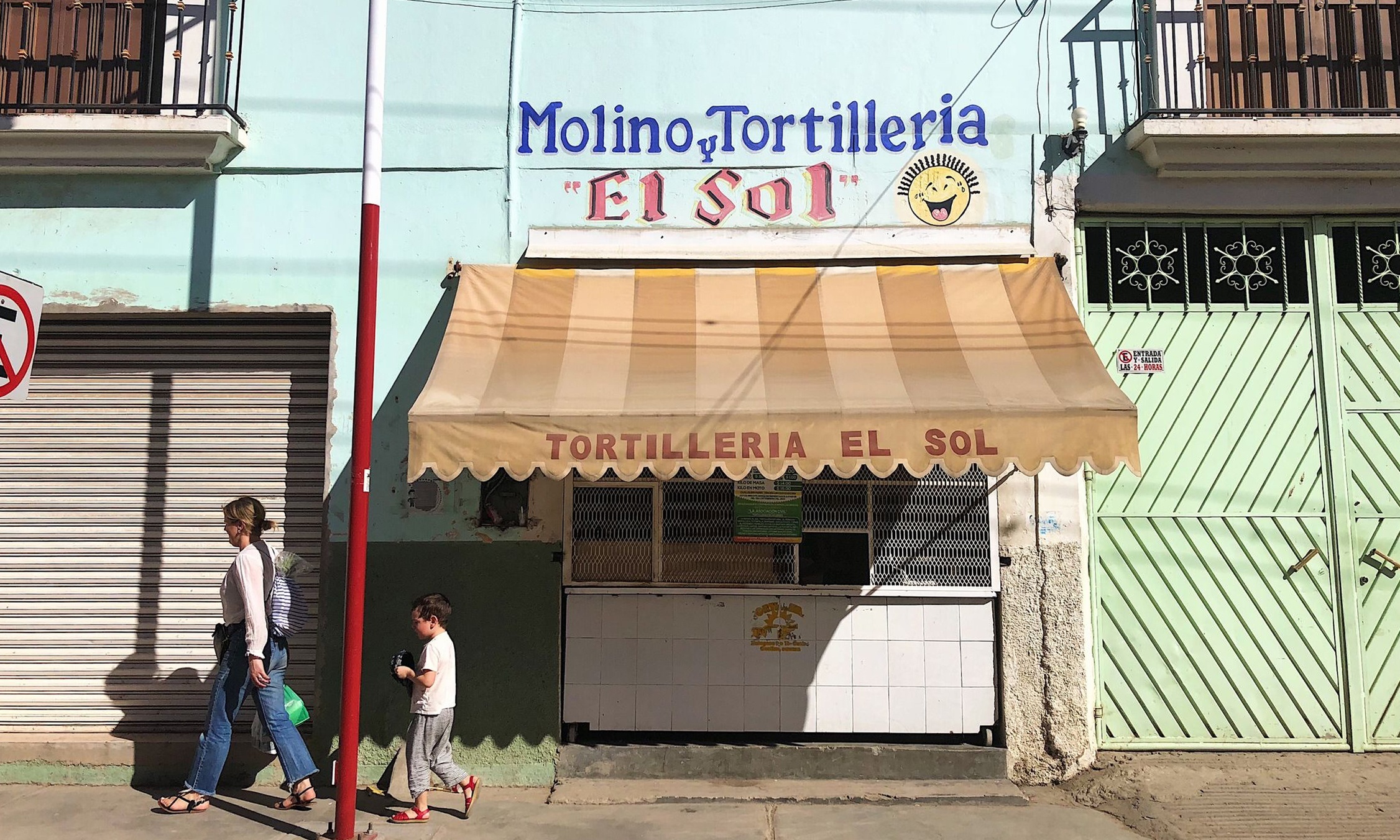 After our quick weekend in Mexico City, the two of us flew to meet up with our pal Lola in Oaxaca City. We wandered a lot and ate leisurely afternoon meals, sipped an inordinate amount of mezcal, played cards on the deck and took in the panoramic views from our mountain house. From there we used all means of transportation to take a handful of great day trips. 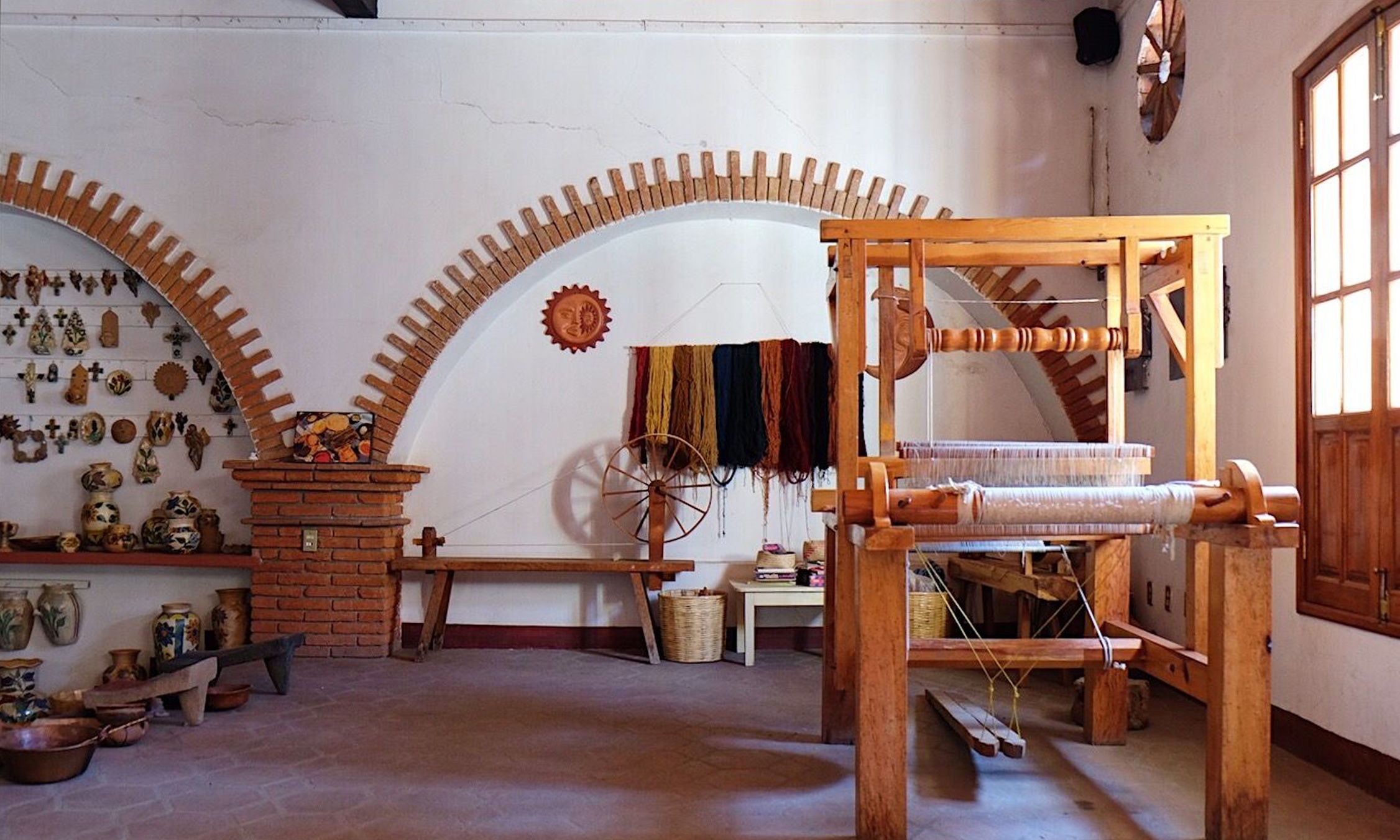 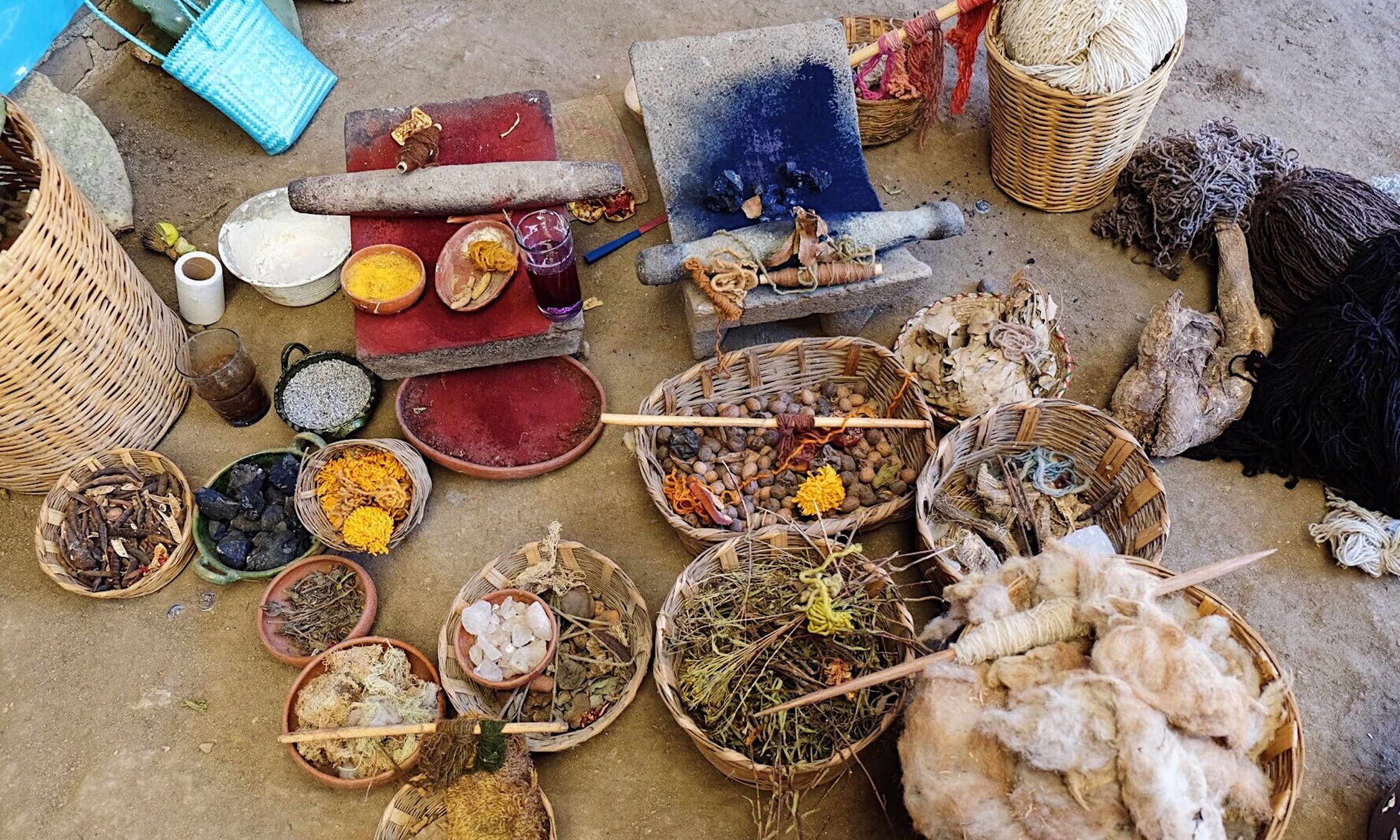 One of our favorite spots was Teotitlán, a community in the mountains just outside the city known for their rugs. It was really amazing to walk through town and see firsthand the culture of natural dyeing, spinning, and weaving handed down from generations. Family members have looms of different scales and produce weavings, everything from small art pieces to large-scale rugs. We saw demos of how the wool is hand-carded, spun and dyed with natural pigments. Cochineal is used to create all different shades of reds and oranges, and others include black walnut, cocoa, pomegranate, and nopal. We also spoke with the owner of a local collective about a large-spread movement to sustainably grow, harvest, process, and distribute indigenous indigo. They are fine-tuning owner-collective systems that stabilize and evenly distribute profits amongst member families and are doing a ton of work and outreach for fair wage production and the advocacy for indigenous craft. I could dive deep into all of this, but you should really just go. And yes, I did buy a rug. (Ok, two.)

When in Oaxaca you should also make a trip to the Ocotlán Friday Market. It’s a 45-minute pothole and speed bump-laden drive south of the city, but the views and landscape are spectacular. We started the day at a local livestock auction—so many goats and pigs in pickup trucks—and arrived at the market by lunchtime. Barbacoa is the name of the game. Also, moles of all varieties, pollo verde, cotija, and fresh tortillas. Produce as far as the eye can see. By the end you’re totally maxed and lugging a thousand plastic bags, dragging your kid through the dense crowds and sweating your buns off. But don’t miss out on grabbing a whole spit-roasted chicken on your way out and a six-pack of Bohemias from the gas station…dinner to go. 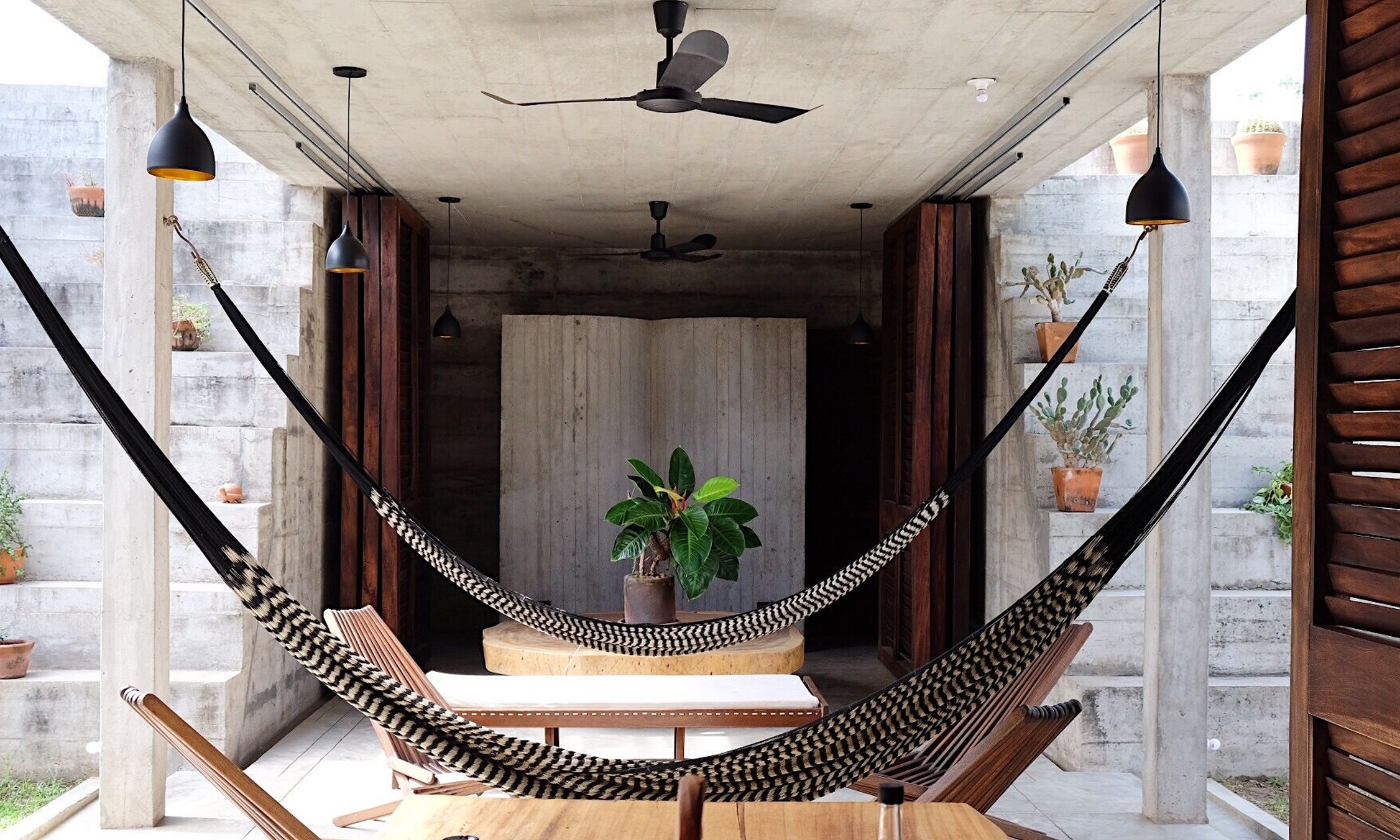 Next stop was Puerto Escondido via 12-seater prop plane, and the arrival of Meghan, my main gal here at O&S. We immediately hopped over to the local breakfast joint and devoured eggs, bacon, toast, and coffee like the gringas we are, seated between a barefoot lady writing in her journal and a dreadlocked surfer on his way to Zicatela. I’ve got to tell you, though, I feel like Puerto is beach life at its best. Not too built up, tons of pristine and cheerful little coves, lots of surfing (for those inclined) and even more guac and beachside margaritas (for those not inclined). Pretty sure I got sunstroke, definitely laughed more than I have in years. The beach was made even better by stumbling on the Best. Damn. House. In. The. World. A solar-powered, open-air, fully cast-concrete palace, built by some of the talented architects responsible for Puerto’s Casa Wabi. The house sat at the end of a long dirt road, guarded by a couple of scraggly dogs and manned by the inimitable Jorge. We fell in love. It’s one of those places that feels like magic. Every detail was considered, every surface beautiful, every succulent happy. The perfect stage for a late-night, mezcal-fueled, improvisational rendition of Beyonce’s Drunk In Love. (Yes, we videotaped it. No, it’s not on the internet.) 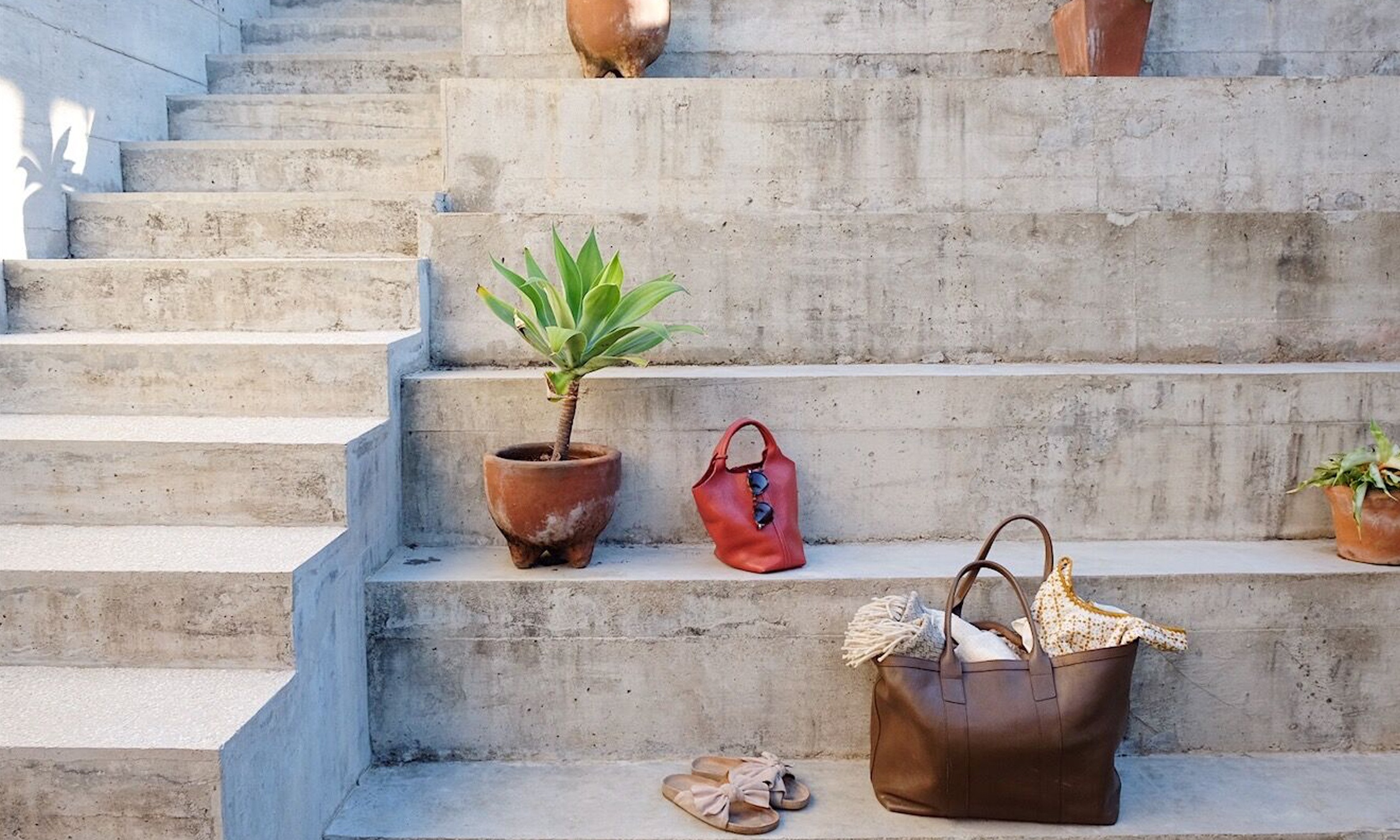 Begrudgingly we left our luxe life and ventured further down the coast to Puerto Angel. There was an earthquake. Everyone was fine. Our “rustic jungle retreat” was wildly misrepresented on the internet. You can’t win ‘em all, but I tell you what: we saw dolphins. And then our dolphin boat captain and his son caught some fresh sardines and cooked them up for us at their family's beachside restaurant. The most delicious bite of food on the southern Oaxacan coast, washed down with a cup of milky Nescafé. As you do. 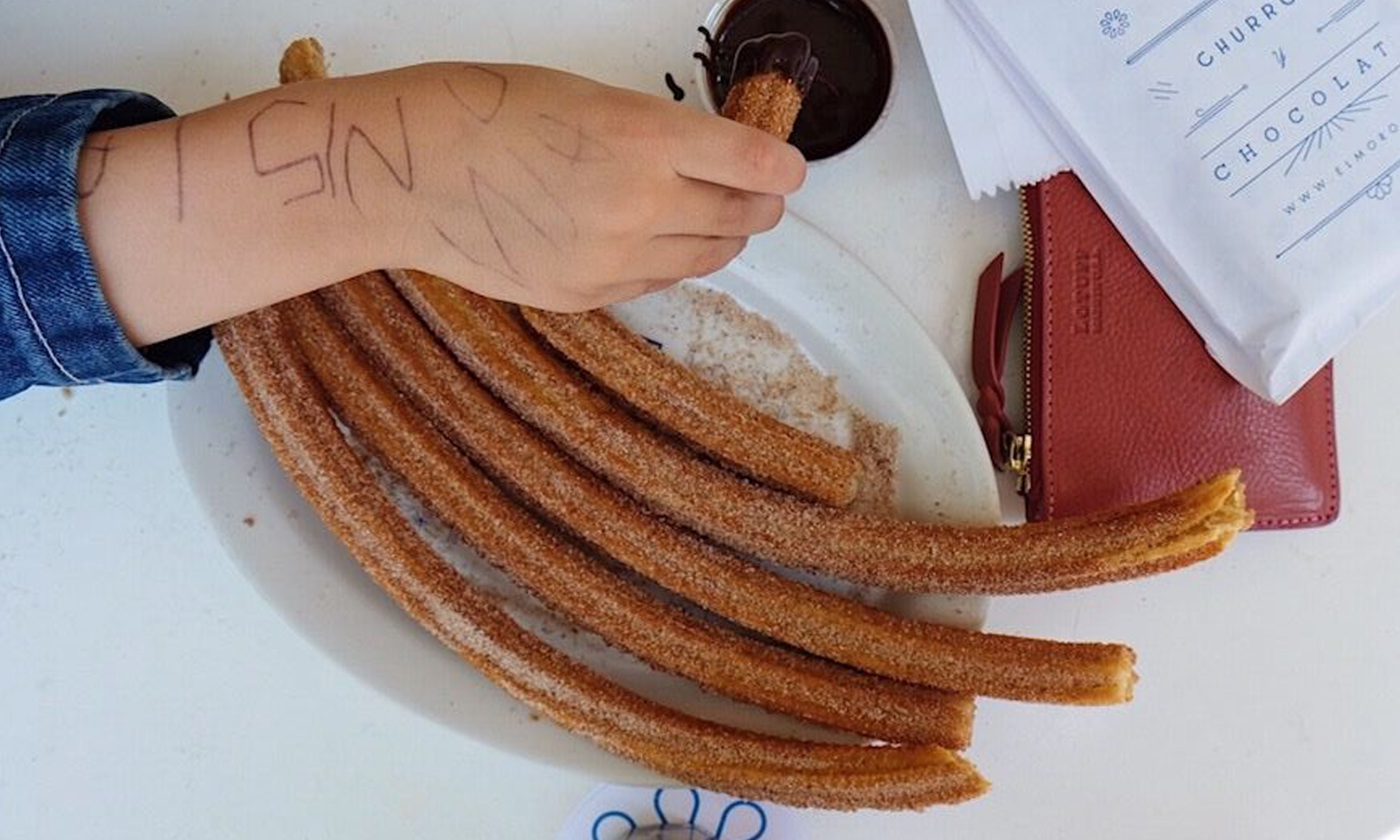 For our last night at the beach we sprung for a poshy hotel suite and an extended sunset dinner overlooking the playa. Somewhere between the entrées and a quick trip to the bathroom, my dear Lola—in really fine Spanish—told our server it was my birthday. (It wasn’t.) But the lights went down, the candle was lit, the entire staff and the middle-aged foursome on vacation from San Antonio serenaded me on our last night at the beach. I’m pretty sure this is how every travel saga should end, no?

So, a few takeaways from this adventure:

One: traveling with a kid can be really cool and totally exhausting. I was surprised daily by my son’s curiosity, flexibility and humor. I was also surprised by how very quickly he would tire of walking and be rendered a complete disaster, only moved by the promise of lime popsicles and TV shows on the iPad.

Two: that One-Piece held everything from banana peels to passports to camera gear to snacks. I had no idea it would be such a vacation workhorse. Add a Tripp and a Working Tote to the mix, and I felt like a fly-ass jetsetting lady (read: pretty cool single mom with too much stuff and a moderately well-behaved child.)

Three: Mexico is the best. I know this is old news to many, but still. GO.